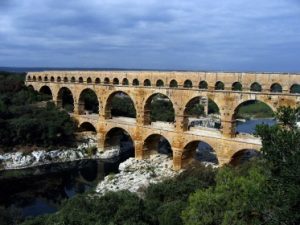 As part of our ‘Roman’ topic, we set Deer and Bat class a problem to solve during their DT lessons. The problem related to the Romans finding themselves in an environment without the essential supply of water. The question posed was ‘How will you get water situated in the hills, down to your Roman settlement located in the valley below?
The children discussed their initial ideas in small groups based on their prior knowledge and understanding of transporting water.
We introduced the idea of aqueducts, discussing and researching what purpose they served, how they were built, and what obvious benefits they gave to the Roman people living in remote areas. Using this new found knowledge the children planned and designed their own aqueduct and discussed materials that they could use to create a working model. Once they had completed their prototype aqueducts they had the opportunity to evaluate the chosen materials. The following week they adjusted, improved and finally produced the amazing aqueducts, some of which you can see in the pictures below. 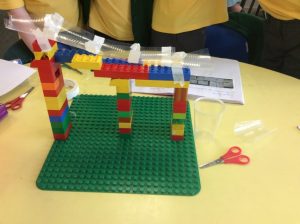 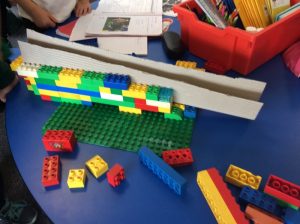 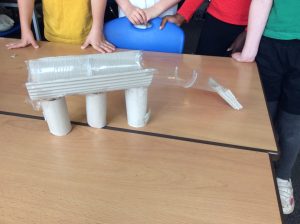 This week the children tested their aqueducts using water! Checking that they really do carry the water from one end to the other without any leaks! It was a great lesson enjoyed by everyone and the children’s aqueducts worked very well. May we also take this opportunity to thank all of the Parents who came to support us during our Year 3 and 4 assembly on Monday 19th June. We hope that you all enjoyed it.

This week in English we have been very busy learning about our new story, Stanley’s Stick. We had a fantastic time collecting sticks and used our imaginations to create some amazing things out of them to use it in our story writing. 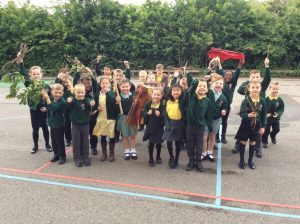 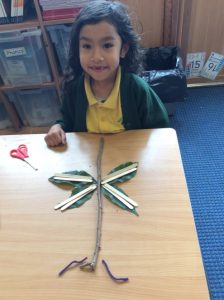 We had a great time at the music festival. The children sang beautifully and they all looked fantastic! 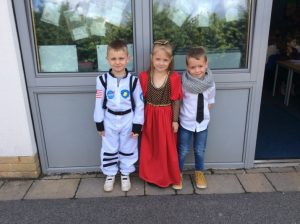 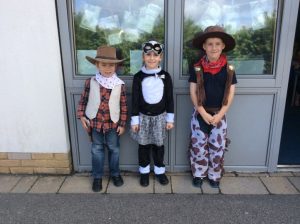 We introduced our new topic, Great Britain with a BANG! We created our own flags, buildings, and transport pictures and we’ve began learning the National Anthem! We are looking forward to learning all about Great Britain! 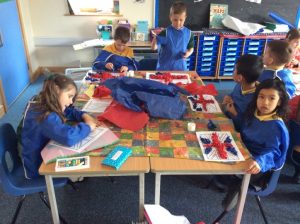 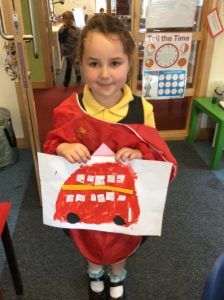 Last Monday saw the beginning of the 4th annual Kings’ Forest Arts Week. This year’s theme was Reduce, Reuse, Recycle and it all started with a bang as Bristol based recycling artists LitterARTI treated the whole school to an interactive, musical assembly. The children loved hearing instruments made from bicycle wheels and disused ironing boards and playing drums made from old water containers. The staff had a go as well, showing everyone that they also ‘like to move it, move it!’

Later on Monday morning, the LitterARTI then worked with Year 3 and Year 6 to create musical instruments for use in our Pop-Up Orchestra: a 60-children-strong band who make music using instruments made from scrap, junk and waste materials! They also made some wonderful sculptures of woodpeckers and bats with those classes.

Mrs. Hatton worked with every class in the school during Arts Week to make a scrap and junk collage of the school logo. It looks suitably glamorous, despite being made of old crisp packets, Easter egg wrappers and buttons!

During the afternoons, children formed mixed-age groups to create performance pieces including: dance; drama; music; and singing. The performances were all filmed by Jesse Webb so that children and parents could get a taste of the action when they watched the film as part of the exhibition on Friday. 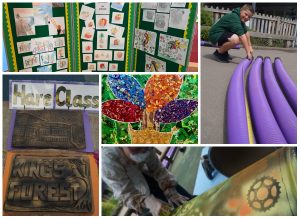 In addition to all of that:

YR – Fox and Owl Classes made brilliant collages of their class animals, using torn up pages from magazines, buttons and other materials.

Y2 – Art teacher and sculptor Vernon Jones teamed up with Year 2 to construct giant, 3D sculptures of their class animals – they look fabulous! 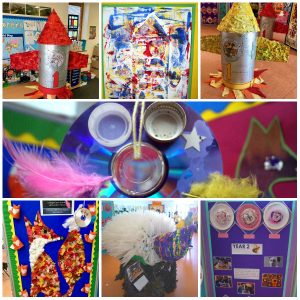 Y3 – Steve the Bat is set to become a school legend, such is the wonder he inspires in his observers, young and old. Deer class also cerated a doe made from cardboard and scavenged branches.

Y4’s section of the exhibition took us on a trip to ancient Egypt, with two huge, magnificent sarcophagi, made entirely of recycled materials, Year 4 also created their class animals (moles and buzzards) out of household waste.

Y5 – Resident artist Matt Jeanes dropped by Year 5 to lend an expert hand with their creation of an amazing full-size armchair and side table, complete with pet dog!

Y6 – Year 6 explored block printing this week, taking inspiration from Victorian textile designer William Morris to create multi-layered images of the natural world. Badger Class all went on a learning walk on Wednesday, photographing and collecting litter around the school. They then created anti-litter posters from the photos that they took. Both classes recycled dried up felt-tips to create ‘spray paint’ and unused SATs papers to make origami flowers.

Hare Class worked with Mr. Jones and Mrs. Pitt to make some amazing clay tiles for the school. They really honed their skills to produce work of the highest quality – well done Hare Class!

Overall, Arts Week 2017 has been a fantastic success. Thank you to everyone who collected materials, brought their creative energy along and tried something new. Suggestions for next year’s theme on a postcard please!… 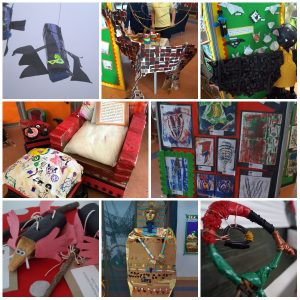