Year 2 had a fantastic trip to the SS Great Britain this week.

We had a guided tour around the ship and learnt all about what it was like to be a passenger back in 1852 on its voyage to Australia. We saw where the 1st and 3rd class passengers slept, ate and what they did for fun, like playing cards and sewing. The talking toilet was probably our highlight!

We also had a workshop all about Brunel and the building of the ship. We time-travelled back to 1843 and helped to build the SS Great Britain. We used tongs, rivets and hammers to join to pieces of iron together to form the hull of the ship. Then we dressed up as members of the crew and Victorian public ready to watch the launch of the spectacular SS Great Britain.

Squirrel class were lucky enough to go to the ‘Being Brunel’ museum to find out even more about how inspirational Isambard Kingdom Brunel was. We went inside his ‘mind’ and saw Brunel’s life through his eyes. It was amazing!

The staff at SS Great Britain were very impressed with our knowledge of Brunel. We asked fantastic questions and also gave some amazing answers. 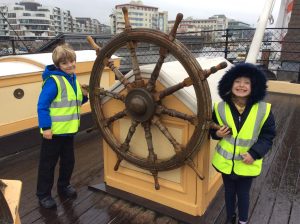 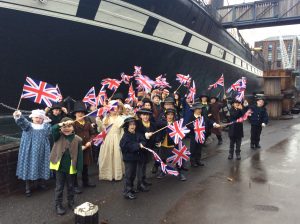 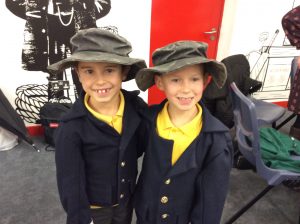 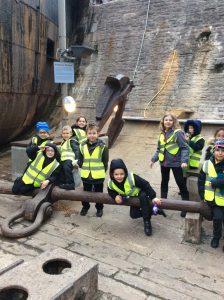 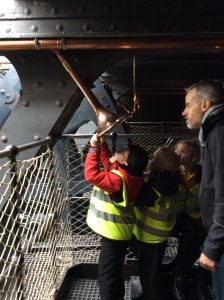 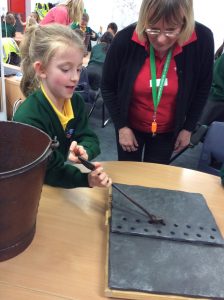 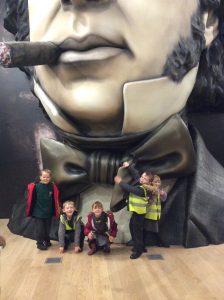 This week, Year 6 were lucky enough to visit the M-Shed museum and take part in a workshop based on how the lives of people in Bristol were impacted during World War One. We explored sources from the past such as photographs and postcards as well as artefacts such as bomb shells and thought about what this told us about life during this time. We were even able to dress up as people from the era and learnt about their roles in society.

We were particularly interested to find out more about conscientious objectors who chose not to fight in war, even when conscription was introduced in 1916. We learnt about how they were sent to prison for refusing to fight and were often given the white feather by people as they were believed to be cowards. 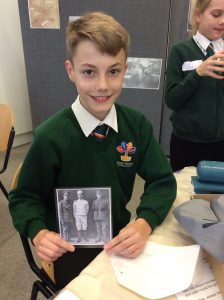 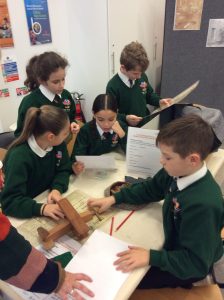 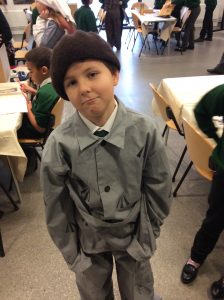 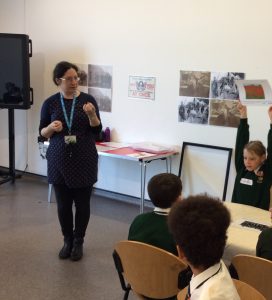 We then enjoyed a visit around the museum and managed to find lots of different things linked to our topic. We were particularly interested in the display which was all about the Suffragettes. We found out about the many different ways in which they fought for their rights. 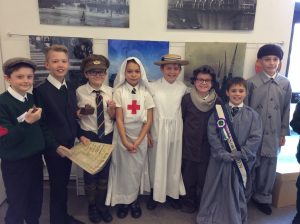 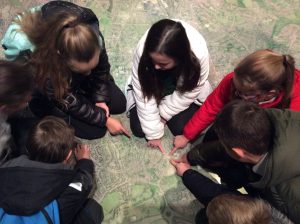 Welcome back to Term 2 and we’ve started it with a big focus on KINDNESS. Let’s see how many year 4 children can gain an ‘I am kind’ sticker from Ms Porter and Miss Robbins. We’re really proud of those children who have already received one!

At the end of last term Year 4 children turned into journalists and went back in time to the Battle of Hastings. They worked extremely hard and we are very proud of their final results. We had a clear focus for the children to ensure they wrote formally and included factually correct information. They amazed us because they were able to remember key facts of the Battle of Hastings without guidance. Most children were fascinated with the way Harold Godwinson took an arrow to the eye, allowing William the Conqueror to be crowned King on Christmas day in 1066.

Year 4 have also shown their creative side with Mr Jeanes and have been focusing on their own Viking character. The children worked really hard to ensure that their Viking people were historically accurate and even were keen to include finer details. 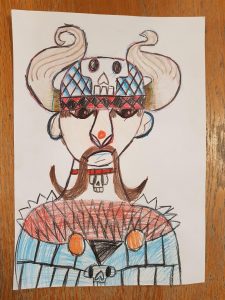 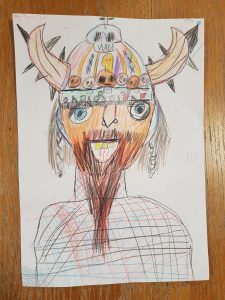 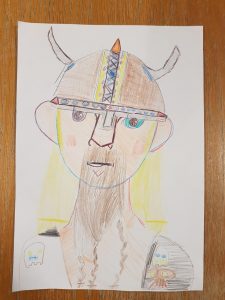 Our next creative venture is in Design and Technology where the children will be cross stitching their initials using Viking Runes.

Can’t wait for a great term 2. Don’t forget that ‘in a world where you can be anything, be kind.’

Ever wondered where your coffee comes from? Year 5 finished last term with fantastic explanation texts on how coffee is made.   We certainly worked hard researching, writing and designing our published pieces.  These included information on where coffee beans grow, how they are harvested and the most popular ways to drink coffee.  We were all proud of our efforts. 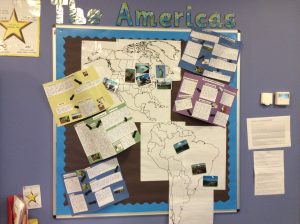 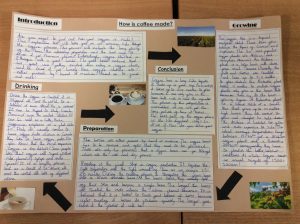 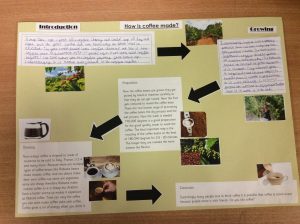 Year 5 have also been great scientists.  We have been developing our scientific knowledge and skills by designing and conducting fair tests.  We investigated whether water temperature had an effect on the dissolving of sucrose (sugar) in smarties which led to some surprising results! 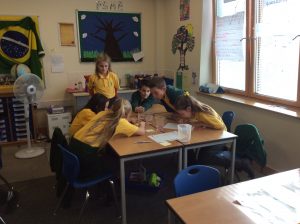 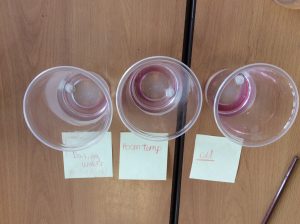 We particularly enjoyed our latest experiment where we used blueberries to dye t-shirt material for different lengths of time to see if it affected the absorption of pigment (colour). This was inspired by our Americas topic including the Native Americans who used fruits and vegetables to dye their clothes, tepees and wigwams. 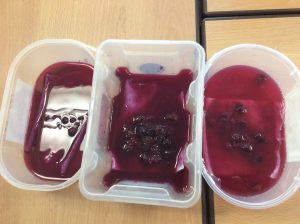 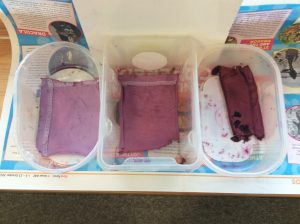 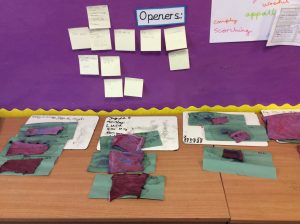 In our topic lessons, year 5 have been focusing on blues music and its influence on modern day music.  We will soon be writing our very own song in the style of the 12 bar blues.  In art with Mr Jeanes, Year 5 produced beautiful pieces of artwork based on landscapes using colour swatches, which have now been framed ready for display.

Year 5 certainly have had a marvellous start to Term 2!

We have been learning the story of ‘Pumpkin Soup’ in our Reading and Writing lessons. The children are loving it! Last week we got to explore digging up vegetables in our school garden so we could cook and taste our very own soup. The children (most!) enjoyed tasting it and said they would love to make it again. This week we have been focussing on instruction writing. The children have been using lots of different grammar to build their own instructions including time connectives, verbs and adverbs! They are very enthusiastic and excited about their writing and I’m sure they have been telling you all about it. Also, we have been learning about Jewish celebrations Rosh Hashanah and Yom Kippur. The children had the opportunity to taste apples dipped in honey which they enjoyed very much. 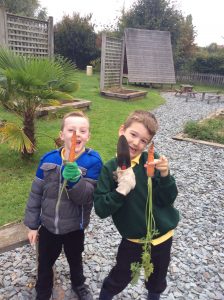 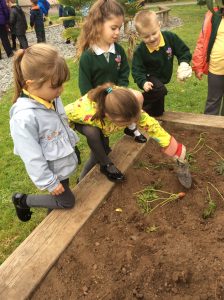 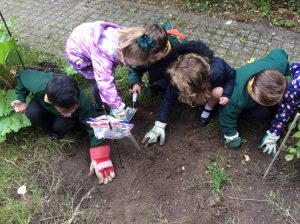 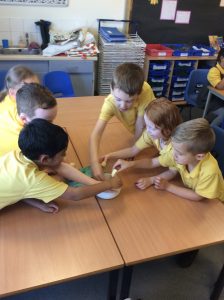 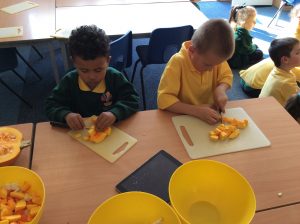 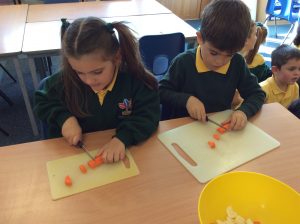